skip to main | skip to sidebar

I am headed to South America to join Plan CEIBAL in Montevideo, Uruguay. It would be odd to blog my experiences there from a blog called "Map Uganda" - so I'm moving to a new blog, MapaDelSur.blogspot.com. Right now you'll see a couple of test posts, maps, and a new activity which I'm developing.

There are 380,000 OLPC laptops in Uruguay's primary schools, with many next-generation laptops to be handed out to older students. Here's the latest YouTube video I could find: http://www.youtube.com/watch?v=qiO_xtVwCcw
Posted by Nick at Thursday, March 17, 2011 No comments:

This neighborhood map was made by volunteers and residents of Nairobi, Kenya.

And they've also entered that data into OpenStreetMap. Link and embedded below

High-tech maps are neat, but without labels they cannot capture the meaning. So the MapKibera organization has held workshops and training sessions to get young people to label and verify these buildings, using local knowledge from a variety of non-profits.
Even the best-planned development projects can be unraveled by poor understanding of a place, what MapKibera calls "ground truth". I was reading about a hydroelectric dam project which relocated villages on paper, but found nobody moved because the new land was associated with witches.


What impresses me most about MapKibera is they've chosen under-represented neighborhoods, left blank or ignored on government maps, as the canvas for a new type of community-building. They're able to make OpenStreetMap's high tech come alive in a place without much more than SMS phones.

They inspired me to keep working with WikiProject Bangladesh, a community and research map which is already starting in the capital. More than a year after our original concept, we are making a new health and disaster response map a reality.
Posted by Nick at Friday, February 18, 2011 No comments:

Because I have been promoting the XO Map Activity and olpcMAP.net, I thought it'd be good to write about a couple of other map projects.

I'm running a course on Online Maps with OpenLayers. The idea behind OpenLayers is that you have many sources of maps, such as ESRI, Google, and Ushahidi, and you want one open system to combine them. That makes it a good fit for Mozilla's School of Webcraft: a new initiative for techies to teach the open web and publish helpful guides for self-learners. Out of the 20 Webcraft courses, this one stands out as one about goals and projects rather than code.

Why am I doing this? Well, maps were the first webpages I wrote on my own. It lets you make something visual and powerful even if you're just a newbie. We'll get some cool projects and true believers out of this course, I'm sure of it. 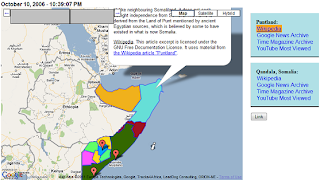 I'm also making maps for RAIN, an environmental group keeping tabs on everything water-related (except rain, ironically). The maps get used by the state's environmental protection office and the city of Pittsburgh. The map itself isn't that special, but it turns their numbers into a live picture of the environment. When I worked on a water research project, it was clear that we need more of these, to take good public data and match it with good visuals. Plus, there's something futuristic about seeing this from hundreds of miles away: 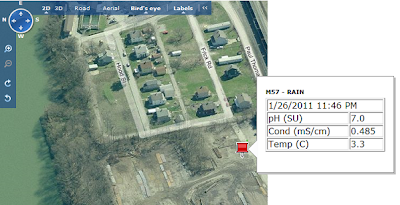 After my second day of the olpcMAP Sprint, I wrote:

Everyone who has stopped by has added their own piece and commented on how we're not exactly following the agenda. I'd compare it to a political convention, maybe? We each came to represent a part of our community, knowing what the end product is (olpcMAP), but with different ideas about what it ought to do.

Today, Friday: I went in thinking that olpcMAP.net was only about networking. After the meeting, I think it can do more to support volunteers' programs. More articles such as the Ntugi School solar setup and my One Stop Media Guide would be available.

This was also a big week for student mapmaking. The Map Activity, used by many students in South America, is getting a new look in 2011. Pilot over to anywhere on Earth, and click to add local photos, Wikipedia articles, and WikiMapia places. It also gives students and teachers a direct line to olpcMAP!

And what can students do by mapping their community? Check out the Surui Tribe's map project to protect the rainforest through Google Earth.
Posted by Nick at Saturday, January 01, 2011 No comments:

I watched a video this morning about Science Leadership Academy, a high school which "gets" digital media and cooperative learning. They even have a 1:1 laptop program. I did more research, and their Acceptable Use Policy for their laptops includes the note:

Agree to not attempt to change hardware settings or non-cosmetic system software settings.

It's disappointing to see a Science Leadership Academy so closed-minded about technology. On one hand, they want to protect the school's MacBooks. On the other, students should learn and discover their technology on a pre-college level. One student made Flash programs in junior and senior year as independent learning projects. A search fails to find other programmers on their website or students' blogs.

Making and watching media on Apple's software will only take someone so far. Treating video as a creative medium, and software as an immutable machine, does these students a disservice. I certainly don't expect everyone to be an expert. What I hope is, students will look at their next video game or a homemade gadget like MakerFaire and think "I could make this" or "I know someone in my class who would make this". Smart filmmakers can work with new, interactive canvases such as Popcorn.js, Palpable Video, or Arcade Fire after a course in HTML and JavaScript, the underlying code that makes the web work.

We use the web every day. Not everyone will be a mechanic, but we shouldn't keep future science and media leaders from looking under the hood. OLPC is open through and through. When I see Walter Bender's e-mail on a Sugar-hacking student in Uruguay, and Bernie Innocenti's photos of kids doing XO repairs, these (elementary school!) students have been given the right tools. So great.
Posted by Nick at Thursday, December 16, 2010 No comments: 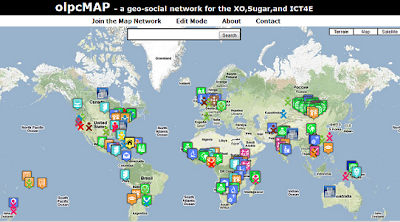 There are 350 volunteers and deployments on the website from nearly every part of the world. Several points were added by OLPC Mongolia, shining a light on their efforts. Yet we need many, many more of you. South America, home to three of OLPC's largest and most active deployments, is nearly empty.

As Sugar and OLPC are based on open technology, olpcMAP will be based on openness. Three main points make this a truly open network:

This post would be lacking without my own olpcMAP links:

projects in Uganda
Posted by Nick at Saturday, December 04, 2010 No comments:

The written word is a two-way street. As the author is telling us something, we learn a bit more about the person. When students write, a good teacher can find places for the student to improve their language skills. But what can a computer see?

In 2003, BookBlog.net released a simple script which counts the number of times common words appear in writing. With 80% accuracy, it then guesses whether the author is male or female. You can try it yourself. Alex Chancellor of The Guardian has an excellent article wondering what this means for equality in the written word. Paired with complexity analysis, a grammar check, slang maps, and other information, computers probably can estimate a writer's native language, familiarity with parts of the language, and dialects used by their English teachers.

This gets to the point which I wanted to make about analysis. A computer can tell if students in Class 3A are using an unusually low amount of prepositional phrases, with a high error rate. Or if students used a variety of new adjectives after reading "The Phantom Tollbooth". Were those adjectives in the book, in the vocabulary quiz given by teachers, or did the story influence students' writing style? When I phrase it this way, it sounds like an awesome idea. If I said, "a consultant in Chicago monitors, directs, and rates each teacher in Montevideo" then it becomes a bad idea. This isn't a privacy issue as much as it's deciding the role of the teacher. We want to help teachers.

We also could use SocialHistory.js, an ingenious script which takes "Share on Facebook" and "Tweet this" buttons and hides them from people who don't use those websites. It didn't take long before a male-or-female test appeared based on 10,000 possible websites, and you can try it here (works in Firefox, IE, and Browse). With some editing, this could be used by educators, too. Suppose I assign a paper, then see how many students read the topic's page on English Wikipedia, versus Spanish or Simple English Wikipedia. We could find out whether students Google the books they read in class, how often teachers visit the Plan Ceibal website, and how many pages students viewed in the Chemistry book in Browse. There are privacy issues, but responsible researchers should use it to get better diagnostics of what schools are doing with their technology.

Suppose we had an activity for students to write and share short story mysteries. We see which resources help students make fewer errors and use more adjectives. It sounds like a research goldmine to me.
Posted by Nick at Sunday, November 07, 2010 No comments:

What sensors will you use?

In addition to electronic sensors:

If you don't have one of OLPC's XO laptops, you can run the same software on any computer from a USB disk. Follow online directions to install Sugar on a Stick.

If you want to use the laptops to make new lesson ideas, to code, or for humanitarian work, you can get a few from the Contributors Program.